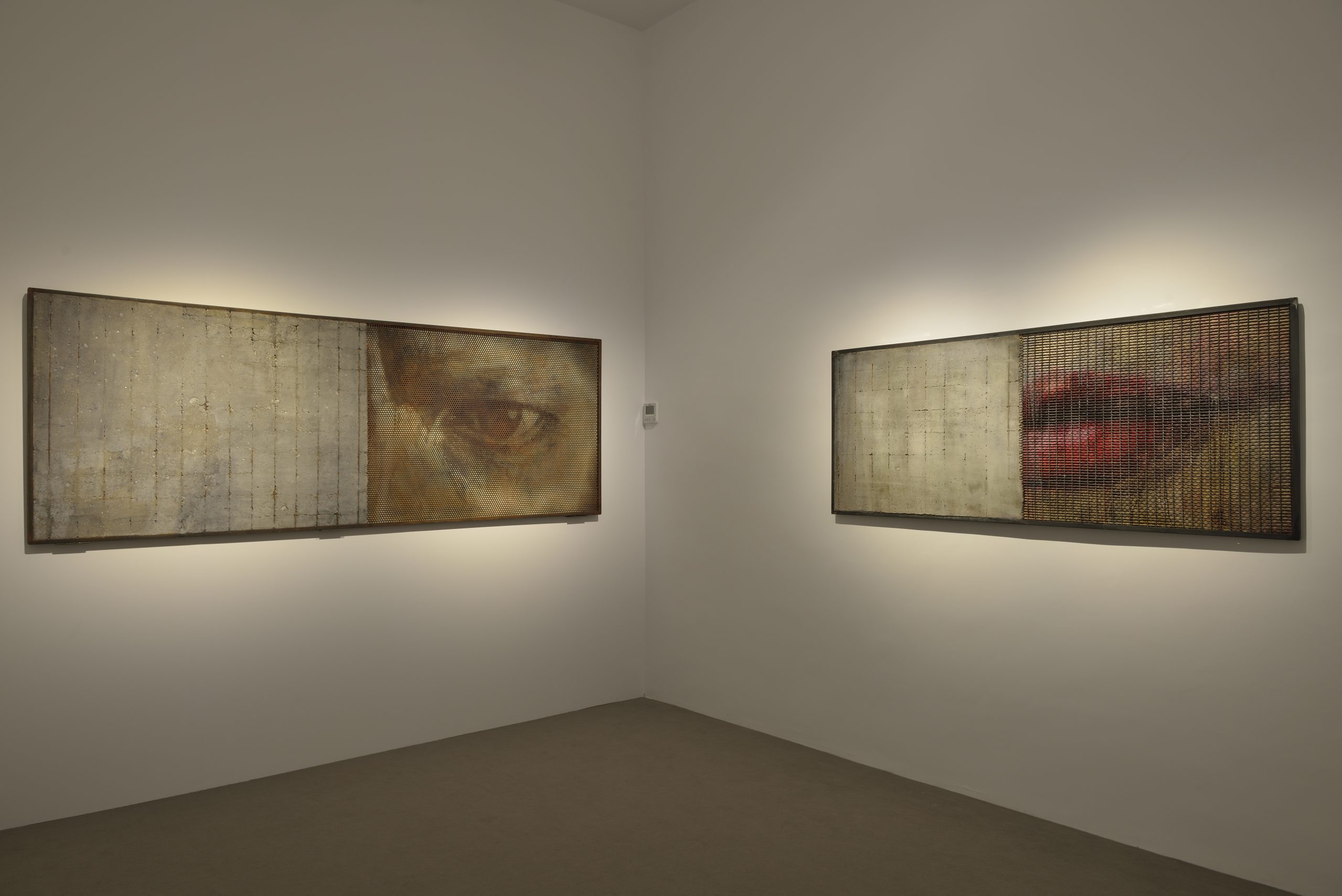 A clean cut inside a white, aseptic and spectrally empty hall, a walk through nothing, a wound that opens its eyes to the chasm of violent, filthy, worn-out and desperate everyday life. Shreds of threadbare and rejected objects, cigarette stumps, wilted plastics, modern exhibits of faded memories, rubbish that sticks to shiny and metallic grids, to cruel and perfect geometries that, like unstoppable magnets, gather up the fragments of a recent past. Brutalities that recompose as chromatic scans, chaotically imposing themselves as a new and surprising colouristic harmony, contemporary Gardens of new “flowers of evil”, epiphanous flowerbeds of a sweet violence. The austere and candid museum room is shaken, it is ripped open by one single razor cut on the floor that points to a new garden beyond the window: a new horizon past the grill of indifferent everyday life.

The room is dark, theatrically built to host this tragic recital: the garden of modernity rises in Golgotha and stoops to build the dramatic scenography of a Crucifixion, only the tragic idea of the Cross: three gigantic plates of ripped, injured, humiliated cement, three abstract figures of frayed mantles, three heavy and rigid Shrouds on which we can see the scars of modernity. The roughness of the cement, the hardness of the steel and rust outline the features of a sufferance that to us become more and more tangible, close and routinely. The emaciated flowers of the garden that is laid out on the floor and the colours of its vomited petals dilute the drama of these plates and soften the skeletal features of their skin or the cuts of their scars. The dim light of the space annuls any narrative distraction, the eye is fixed on the works and no failure, truce or compassion are granted to the eye.

Bourbon Hospice for the Poor, Palermo, 2018

Two rows of silent monks are absorbed in their thoughts, leaning on the walls, wrapped in a tired habit of cement. In silence, they exhibit the stigmata of a cruel everyday life while offering heraldic crests of a suffering newness. Like silent warrior monks, they witness the liturgical procession of brothers adorned with ceremonial vestments belonging to the street, to waste, to marginalization. In the austere nunnery rooms, the rite of topicality is being officiated.

Not the aseptic museum rooms anymore, or the imposing cleric halls, but eccentric spaces of an exuberant aristocracy that, even in this case, are bent to the narrative necessities of an art that forces space to impose its own acting. And so, the coarseness of Francesca Leone’s contemporary language seizes the classical lines of Roman environments and retraces the spaces of the Pompeian “Domus”. The halls rotate around a flowery ‘Atrium’, a garden of colourful waste upon which “cubicula” overlook: the former opens through a wide window onto the rusty landscape of metal sheets where unexpected chromatic ignitions set free the pigment of the metallic surface. A ferrous skin, refined  by the elegance of the frieze, a traced line that chases horizons and landscapes along the broad walls of the “Tablinum”.  Sheltered in a corner of the villa, secluded and discreet, the “Triclinium” opens, an intimate and reserved room in which the works can show their face, open up their soul, free their forms, their body and their gaze from the materico armour and rules of seclusion. A closed room that protects the secret soul of this art: merciless and cruel in its language yet subtle, elegant and sweet in its thought.

For Francesca Leone, this three-year artistic journey has been a severe and disciplined artistic journey, accompanied by constant research and experimentation, crossed by sudden intuitions but also pauses, afterthoughts and doubts. All works have been submitted to a careful rereading that began from the necessity to strip, to find essentiality and cleanliness, attacking every technical aspect right down to the root of the narration. First of all, the artist has investigated the physical structure of the materials, accepting even the challenge of the most tricky and complex.  Raw concrete, metal grills, rusty iron, rocks and waste objects emerged, or even urban trash, burned plastic and rubber, composing an alphabet of street modernity with which Francesca Leone began to define a stylistic grammar of her own.

There was no aesthetic complacency, no formal romanticism, no captivating surprise but only ruthless analyses, obsessive research, a stubborn study of the expressive value of every single materico fragment. There is no doubt that this severity and rigour are also the result of a long and wearying preceding process, developed through the acquisition of the technical knowledge of sculpture and ceramics; equally evident is the solid academic preparation in painting and figurative art. In these three years of great exhibitive experiences, though, one has assisted, with astonishing determination, at a work of surgical precision applied to all the components of this art. Not only were the constituent alphabet, the formal grammar, the narrative horizon and the conceptual level all revisited, but also the choice of the scenic installation on which the narration is grafted. Francesca Leone has shown courage, strength and confidence in placing her work under examination, in selecting it relentlessly, in investigating inside the cracks and in the shadows, beyond what meets the eye. She measured herself against different and demanding spaces, she broadened her shapes, she gradually consolidated her language intent on defining a new harmony between the rough compositional barbarity of narration and its sophisticated complexity. The eye had to therefore wade through the swamp of everyday life, immerse itself in muddy images, gather up putrid objects that the surface let emerge, clean cogs, recuperate plastics, papers, cigarettes, to catch a sample of terrible everyday life. The figure has retreated and everything from the evocative images, to the languid faces, to the sensual mouths, appeased under a materico overwhelming and violent veil; the narration has become trickier and articulated, renouncing its concise approach in favour of the challenge of a more complex thought. The brutality of matter, where the shreds of a hard modernity clot, has not, though, impeded the use of a lucid geometry, a sort of rational counterweight to the chaotic impulsiveness of matter. This way, a thin dialectic establishes itself in the creases of this language, between the domain of the conglomerate background and the mathematical balance of the spatial allocation, and it is precisely through this narrative dynamic that the single protagonists can play their part; it is on this uncertain ground that the fragments of the world can recuperate their memory and design a new world. Francesca Leone creates ample scenographies in which each actor accurately plays his own role: the isolated part, almost hidden, of a crystal and a bright stone drowned in the concrete, the shrill and changing one of a coloured plastic that turns on its own intermittency with the skimming of the spectator’s eye, the hieratic and majestic role of the discovered object that exhibits its scenic presence in the central pose or, once again, the corroded rust that surprises with the sweet and melodic voice of the drawing. Now the work can turn its gaze back towards the pathway it has taken, relive the hazards it has undergone, smile about the vanquished doubts, rejoice about the achievements now transformed into new departures, recuperate even some dreams that were put aside during the journey, grab the backpack of memories, experiences or loved ones that were neglected in these three years of stubborn pursuit. And so, yet again, one welcomes the shape, recognises the familiar face of the painting, fathoms, in the bituminous and conglomerated surface of matter, the thrill from the beating wings of colour or the evanescent traces of a face, an eye, a mouth, a foot. Not the sugar-coated and complacent representation of a distant and deceitful reality, but the one that is profoundly aware of a violent modernity.

A courageous image that accepts to live in the cracks of concrete, protected by grates, ready for the subtle game between ‘apparent reality’ and ‘physical reality’, between painting and matter. The new narration that Francesca Leone has started to describe is today conceptually solid, it does not fear ‘getting its hands dirty’ with the waste of an invasive and bullying consumerism, or measuring itself with the geometric rigidities of a rational composition; it is a narration that can embellish through the alchemies of painting but also thematically influence the difficulties of a topicality that is constantly balancing on an unknown chasm.

In spite of the fact that these works use waste materials and objects that are found, there is no space for the playful and revolutionary spirit of Jean Tingualy anymore, no ‘situationist’ jolt, no provocative scream of the Nouveau Realisme, but a gloomy and suffered awareness of a reality that gives no escape and to which only an intimate, secret resistance can be opposed. There is no trace of pessimism in these works but only a tragic realism, a romantic abandonment of Utopia for the mud of actuality; it is a severe and unforgiving narrative that positions the ‘making of art’ far away from comforting drifts, depriving it from every pleasant superficiality. This art knows its role; it knows that it has renounced the comforts of decoration and adornment to face the path of quest and study. It is an art that mirrors itself in reality, and one which brazens it out even against the most uncomfortable truths.

Francesca Leone’s art, after a long crossing, arrives at the territories of a tiring and hostile modernity, capable of gobbling up and digesting anything; here, to survive, art must wrap itself up into its own strong and intense chronicle. It is to the truth of everyday life that the scalpel of a profound incision etched deeply into the tissues of contemporaneity is offered, the benevolent and reassuring panaceas abandoned to face the hurtful pathway of a rusty and metallic gaze that, though, unexpectedly, lightens up with flashes of colour and suggestions of landscapes.

It is in the fall of the tragedy that Francesca Leone’s art finds the liberating poetry of the fragments of a hinted, diluted and foggy figuration; it is in the skin of an undulating plate that the elegance of a suspended landscape emerges, more sensed than seen, muffled by memories and emotions. The cruel harshness of the compositional materials goes with the silent whisper of paint that is only hinted, more similar to an uncertain apparition rather than to a clear vision. This is how the entire narration of this art is reconstructed in perpetual fluctuation between enchantment and analysis, research and dream, reality and appearance. 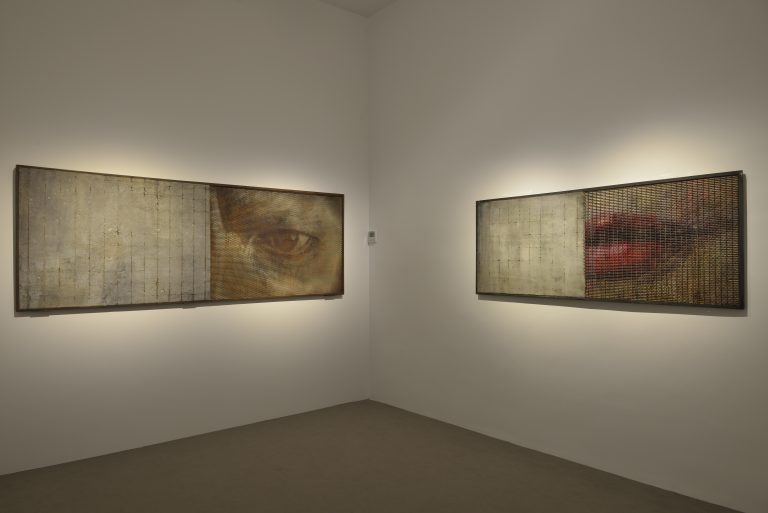 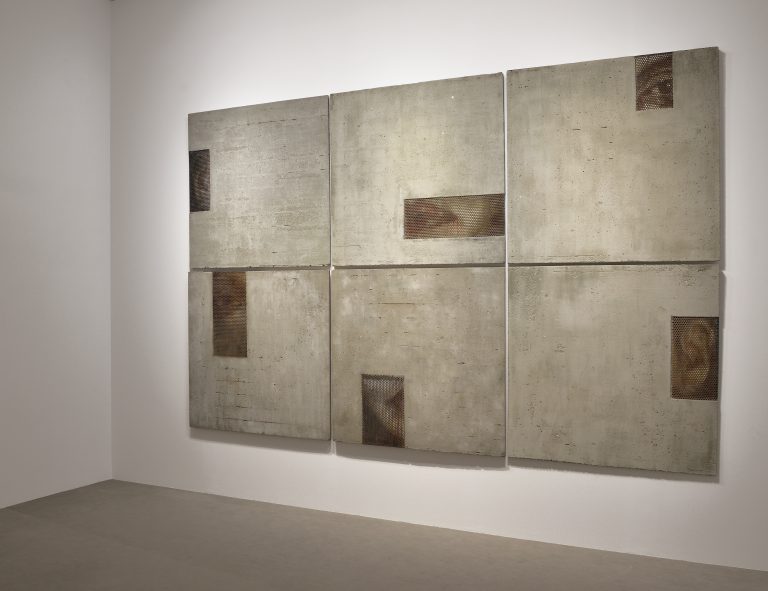 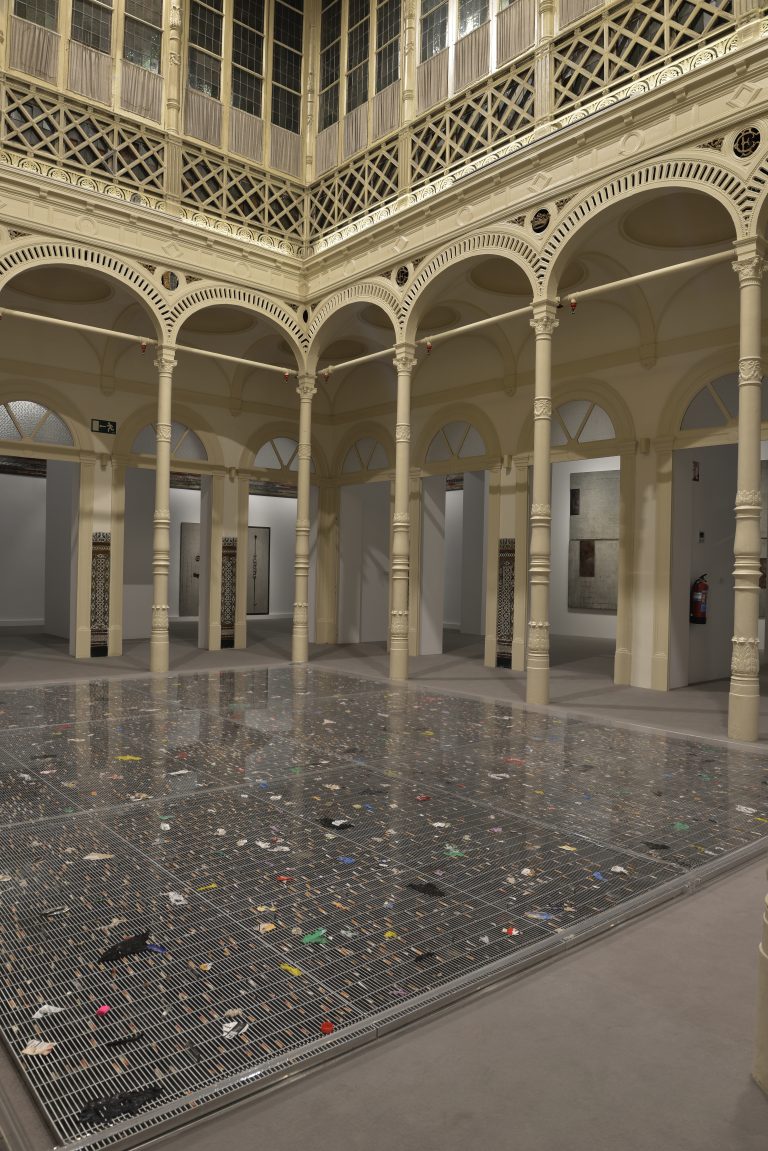 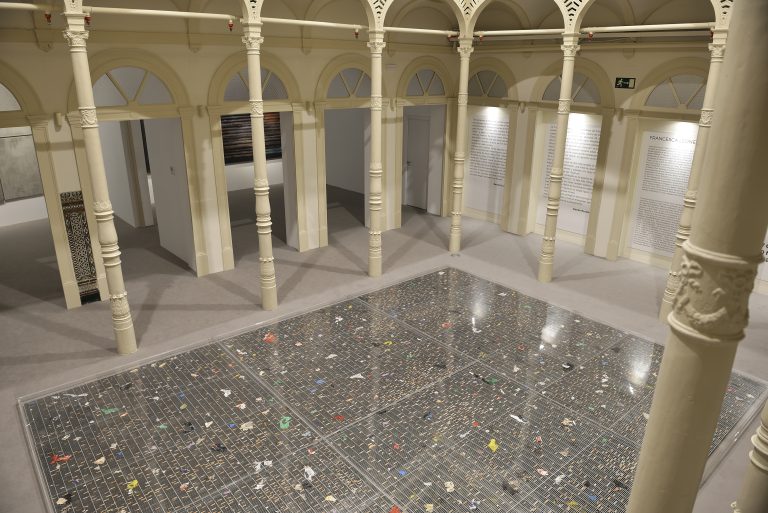 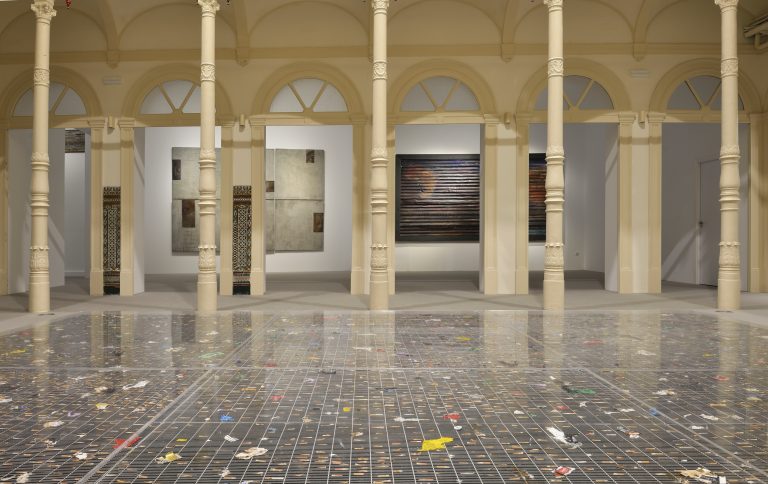 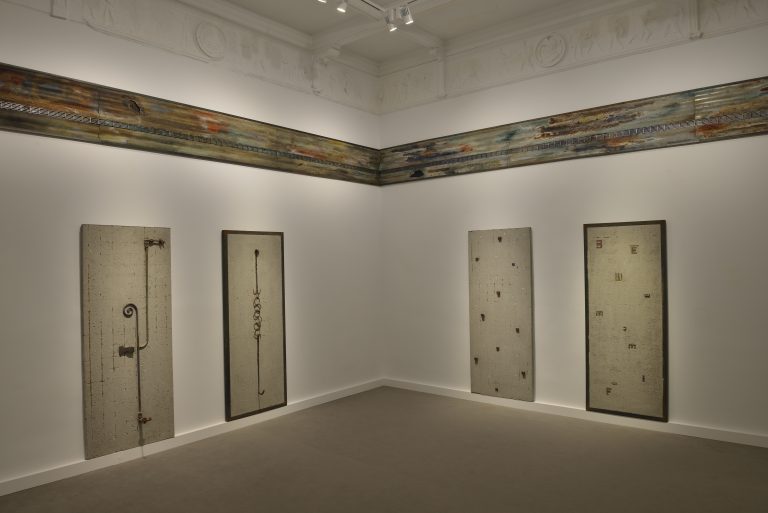 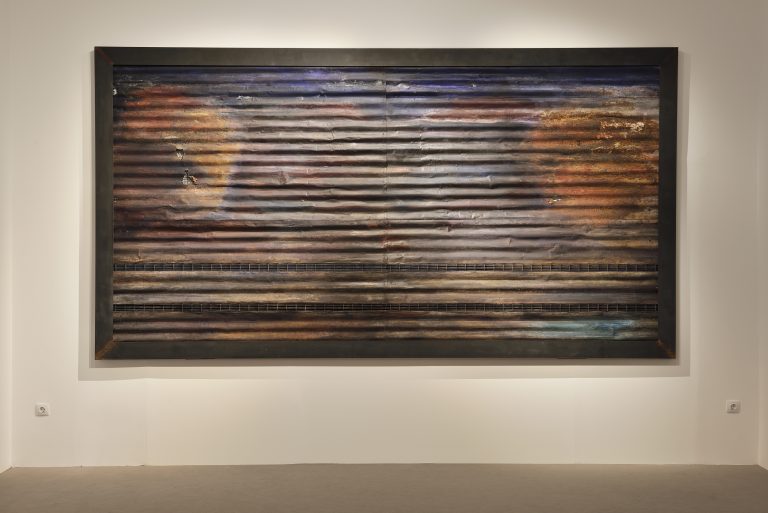