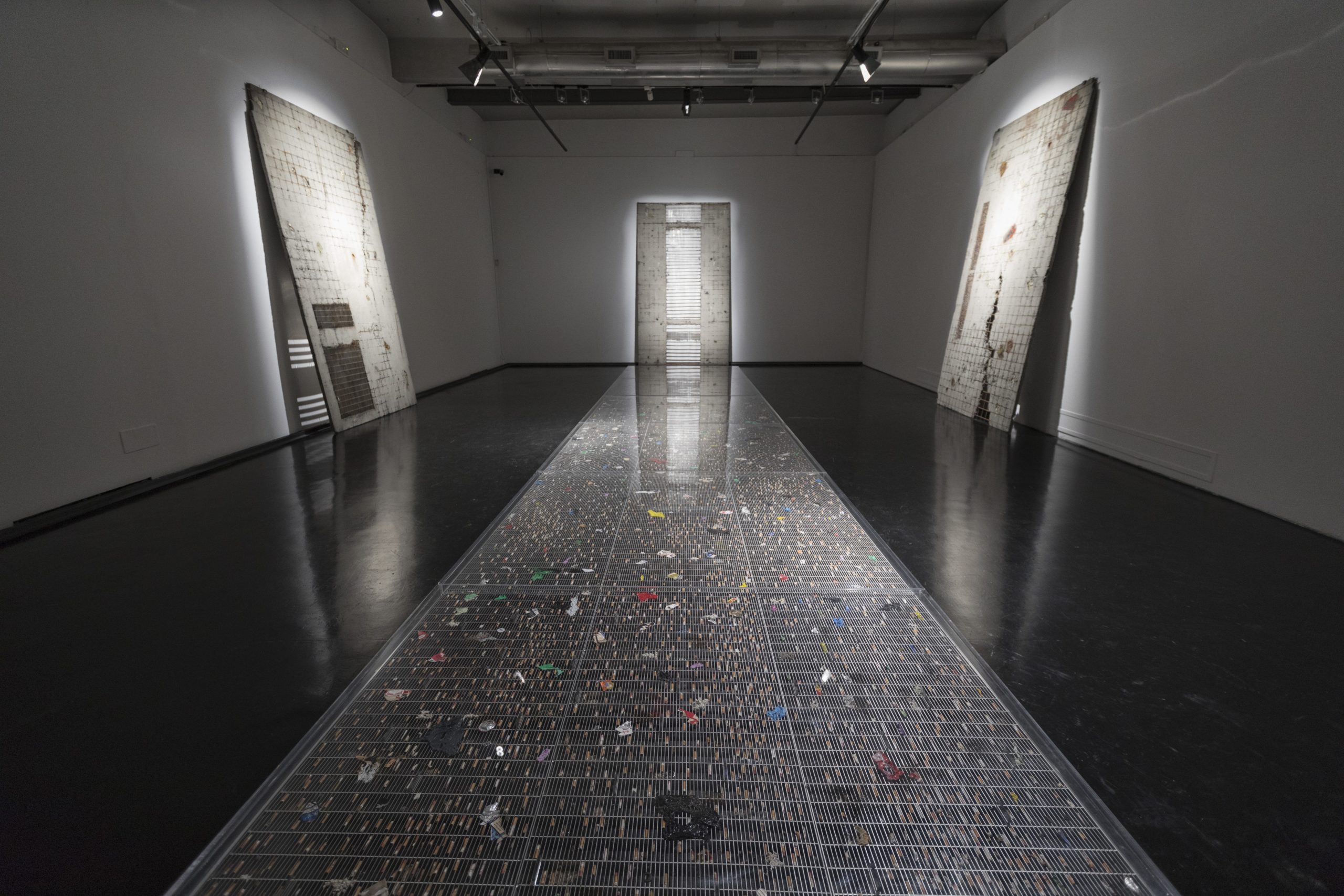 It was in the 1920s that Kurt Schwitters started building his Merzbau, off Waldstrasse in Hanover. Merzbau was his home-studio and masterpiece: a place where, until 1933, the artist collected a multitude of objects, waste, scraps and relics belonging to his own personal everyday life, and to that of his friends and acquaintances. Cigarette butts, newspaper cuttings, used tram tickets, nails, hair, a whole landscape of rubbish that was the proof of the normality, simplicity and humility of his presence.

They were the signs of a passed existence, the fragmented tale of shreds of an individual life, banal events, sudden flashes and instantaneous memories. The Merzbau was about the randomness of life, the haphazardness of human existence, the refuse of a distracted nature of daily life. A work that was never to be completed, it was a process of bulimic accumulation that at first invaded the studio of the artist, then spread to his home and swallowed up the two floors of the entire building. It is an obsessive collection that was ended by a tragic bombardment by the Allies in 1943.

It was in 2015, in the Triennale di Milano museum, that Francesca Leone took a completely empty room and displayed a long metallic grille in which the waste matter of social fortuity was entangled. Cigarette butts, newspaper cuttings, used tram tickets, glimpses of an urban landscape that had been walked on, spat onto and thrown far away. They were not the scraps of an intimate, personal, friendly, recognizable and familiar object belonging to a collector of dirty and vulgar relics, exclusive possessions and therefore friends, but an anonymous “rejection”, a distant and unknown one, a much more complex subject that lacks its own individuality but presents itself in the iridescent guise of society.

The light is raised and the artist’s gaze no longer frames the individual: it instead looks upon a huge body, a monster with no head and no legs, yet seemingly still shaken by the uncontrollable swarming of its own meat.  It is a cannibal society that feeds off the same individuals that compose it, devouring itself by lacerating its own skin and leaving its organs to fight and destroy one another, devouring one and all, knowing how to regenerate itself continuously, becoming bigger every time, stronger, more powerful and more monstrous. The artist sinks her hands into the warm and live bowels of this society, she seizes its pain, she grasps its colours and she knows that individuality has liquefied and dissolved in a swamp of infinite voices, countless looks, incomprehensible memories, angry thoughts.

It is a noisy silence, a thick emptiness, the freezing heat of an unknown community that collides in the streets, clings to the same subway, composes itself untidily in endless human queues. Francesca Leone records all these voices, captures all these gazes, chases all these thoughts, without recognizing any face, without blocking anybody, without indicating any figures.  They are just splinters of any life, fragments of anonymous gestures and behaviour, waste dragged by the flood of a society that has already crushed us.

In the liquid flux of a precarious collective, Francesca Leone does not renounce the attempt to order language; in this indistinct clamour, the artist searches for the discipline of grammar, which serves as the security of industrial, reliable and familiar geometrics. The geometric grille represents a formal solution that holds back life’s chaos, both physically and conceptually.  Just like absorbent paper dipped into the liquid of modernity, the geometrical order gathers and keeps those small and fragile impurities in their daily flow, enclosed in chewing gum, cigarettes, plastic containers, commercial tags. The current of existence abandons, by the roadside, imperceptible waste which settles and crams the interstices of a metal skin; it is along ferrous drains that the debris of a worn and rabid urbanity scrunch up in trampled on plastic.

The storyline, which is ordained by the Cartesian Axes, marks the precise borders of a landscape that is able to contain the disorder of the world, exactly as the education of a formal language can describe the vulgarity of violent acts. Francesca Leone’s metallic grille is a poetic shield against the offences of an oblivious and superficial reality, one that is unable to contain its untidiness and discourtesy.  However, it is for this exact reason that it represents an extraordinarily expressive and realistic document of its own contemporaneity, its own truth.

If the metallic grille is the screen upon which images of gashed contemporaneity flow in its unstoppable course, the reinforced concrete is the symbol of its construction, the composing act of a society that has now erupted. In this case, the effort becomes even harder, and one cannot limit oneself to an archivistic collection of fragments of life because now the work also imposes the challenge of construction.  It embraces complex formal dynamics, accepts rigid grammar rules in search of a language that finds a balance between architectonic severity and the poetry of a mental construction, light and reliant on the haziness of thought.

Francesca Leone began reflecting on the use of cement almost two years ago after experimenting with many industrial materials. She investigated the expressive importance of the “Cements” realized by Giuseppe Uncini between the fifties and sixties. It was not only a homage to the great Maestro, but also an evolution of that research.  In both paths, the brutal and violent use of reinforced concrete represents a precious document that defines an urban landscape.  According to Francesca Leone, physical corrosion has reached critical value, even more important than the psychological aspect of society. Free from the complex theoretical, ideological and critical contortions of the Italian art of the fifties, Francesca Leone is able to carve cement with a new creative force. As in other works, from the ripped vulgarity of matter emerges an ailing geometrical order, a metallic rusty net, consumed, which seems to whisper its last breath of discipline. An uncertain control, a simple semblance of hierarchy and authority that succumbs to the corrosion of the process of its own oxidation and drowns in the swampy surface of the concrete.

Similar to the metal grilles, even cement recounts an urban landscape in its desperate search of a balance between the aggressive passing of time and the need to address change, guiding it in its choices. The wish to stage this exhibition at Macro, placing the giant metallic grille next to three majestic cement works, expresses Francesca Leone’s will to expand the act of art to two different screenplays, two distinct voices that face the same motif, two close glimpses that are addressed to the same social body.

It is difficult for a painter to renounce the use of colours, yes, because Francesca Leone is, first and foremost, a painter.  It is in her soul, in the way she caresses materials, arranges the coloured plastics, lightly touches and accentuates the nuances of the greys in cement.  At the beginning, one’s eye rests only on the shiny reflection of steel or on the inert monochromatic surface of pre-stressed concrete, but then, on closer inspection, one catches sight of more intimate and discreet sparkles:  red flashes, sudden blue precipices, bolts of bright yellow, more timid and subdued slivers of green.

They are the flowers of this twisted landscape, fragile nocturnal fireflies in a city that has annulled darkness in favour of a blinding, false stroboscopic luminosity.   They are the colours of our daily life, brilliant or opaque, always chemically certain, convinced of their plastic supremacy.  A subterranean epiphany, a passing carnival, a hen night, a party to celebrate one’s degree, a ‘happy hour’ carried on late into the night.  They are resistant smiles, small secret joys that are hidden from the hurried glance, which conceal themselves in the fog of matter: they are there, whispered, but they are there.  They are the signs of an intimate redemption, that of resistance, which recognises reality and tries to find, in its cracks, survival capable of protecting and preserving hope.  This is an art that screams in pain, which nourishes itself on refuse and scraps, which sinks into the dark peripheries of life but is unable to cancel a reassuring dream, a liberating fantasy, an intimate poetic dimension in which painting, sculpture and installation blend in a unique creative act, in the magic of the work.

That is how Francesca Leone’s secret gardens open: enchanted places where gloomy

landscapes live alongside the joys of colour, where one can touch the earth’s wounds and sense the pleasures of living.  They are magical lands where it is possible to trip up on every image, the dirty fables of Nathalie Djurberg or the atrocious stories of Kara Walker.  Both the metallic grates and the cement are the images of these new urban gardens, with their new perfumes that accompany our lives, foul-smelling gardens where one can find a subtle beauty, a delicate pursuit of colours, where new plastic flowers dot a spectral panorama.  It is similar to a painting of a large ‘Still Life’ that has swallowed our individual lives in the flaccid body of society, a scarred skin that covers vital impulses and allows only weak fragments to bloom.  However, it is precisely in these slivers of life, in this abandoned refuse, that Francesca Leone tries to reconstruct a possible reality.  The glimmers of light continue to reclaim their own truth, weak tea lights that ignite the suspicion of new and more intense luminosity.  Grilles and cement superimpose and blend into each other in an acute expressive twist that develops into a raw, blunt, coarse, sometimes even vulgar, language, the hoarse voice of a ravenous contemporary state.  However, this is our era, a modernity that seems to squash every poem, every lightness, every fantasy, but that, on close inspection, knows how to take every quality as its own gift to whoever sets out on the journey to find it, whoever stops to listen to it, whoever is not afraid to caress it. 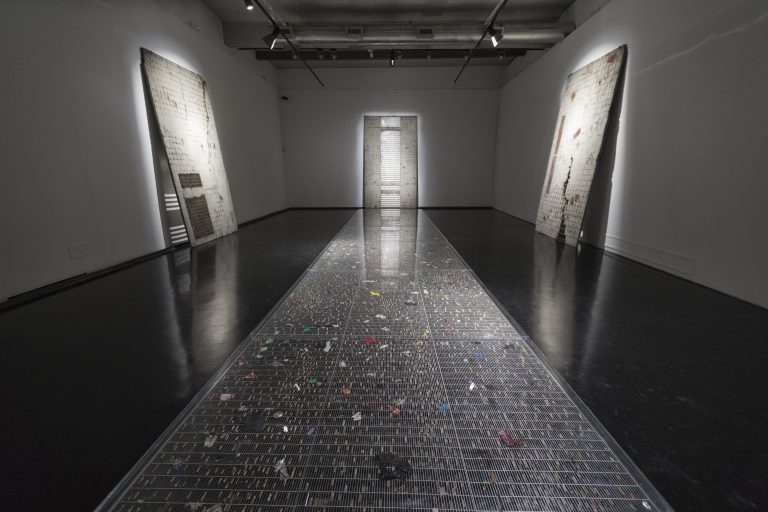 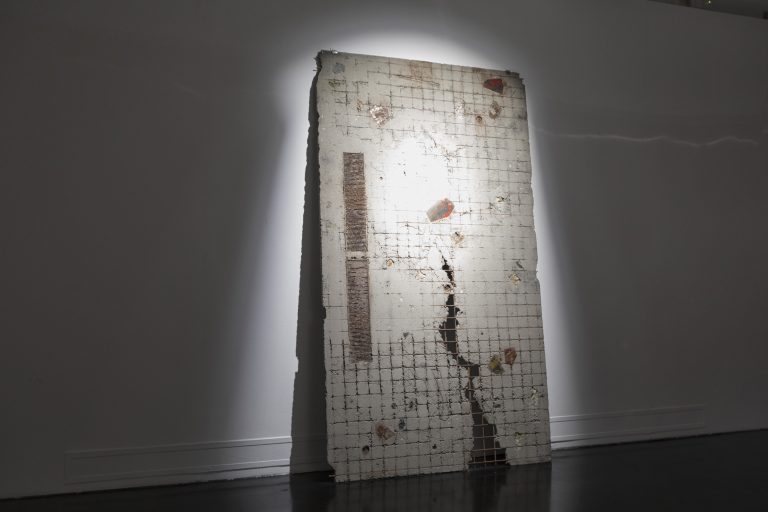 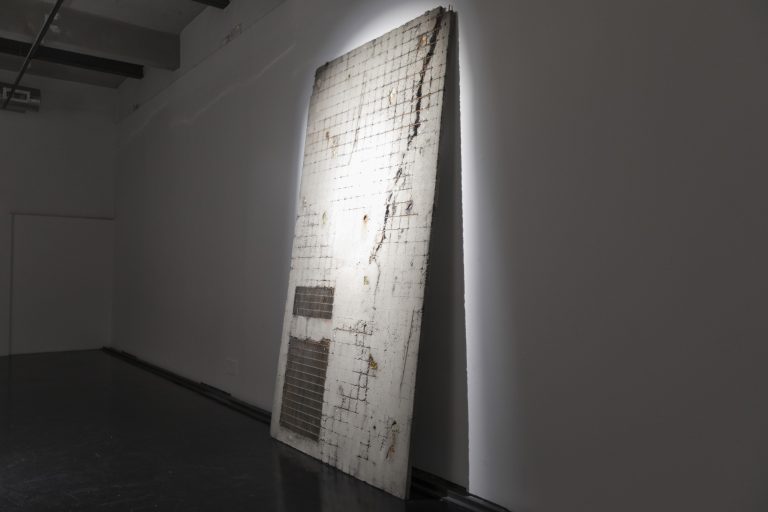 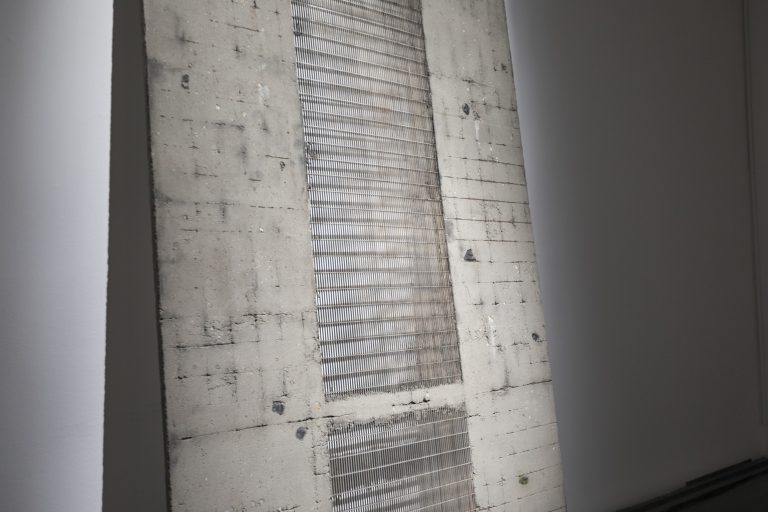 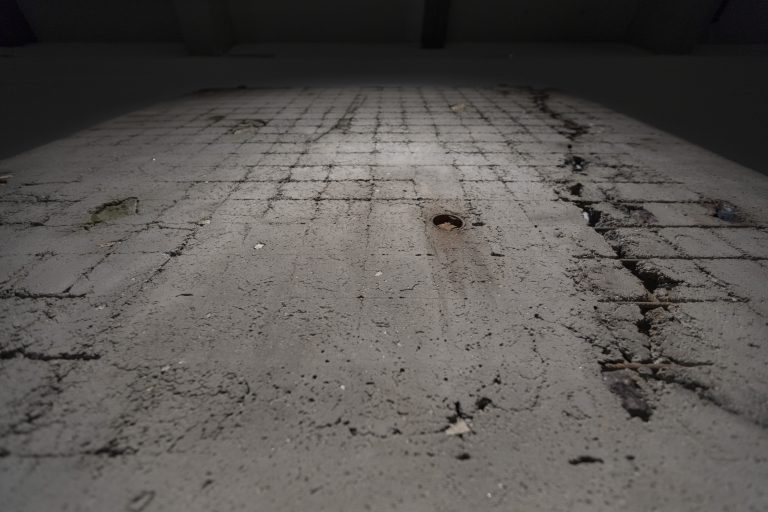