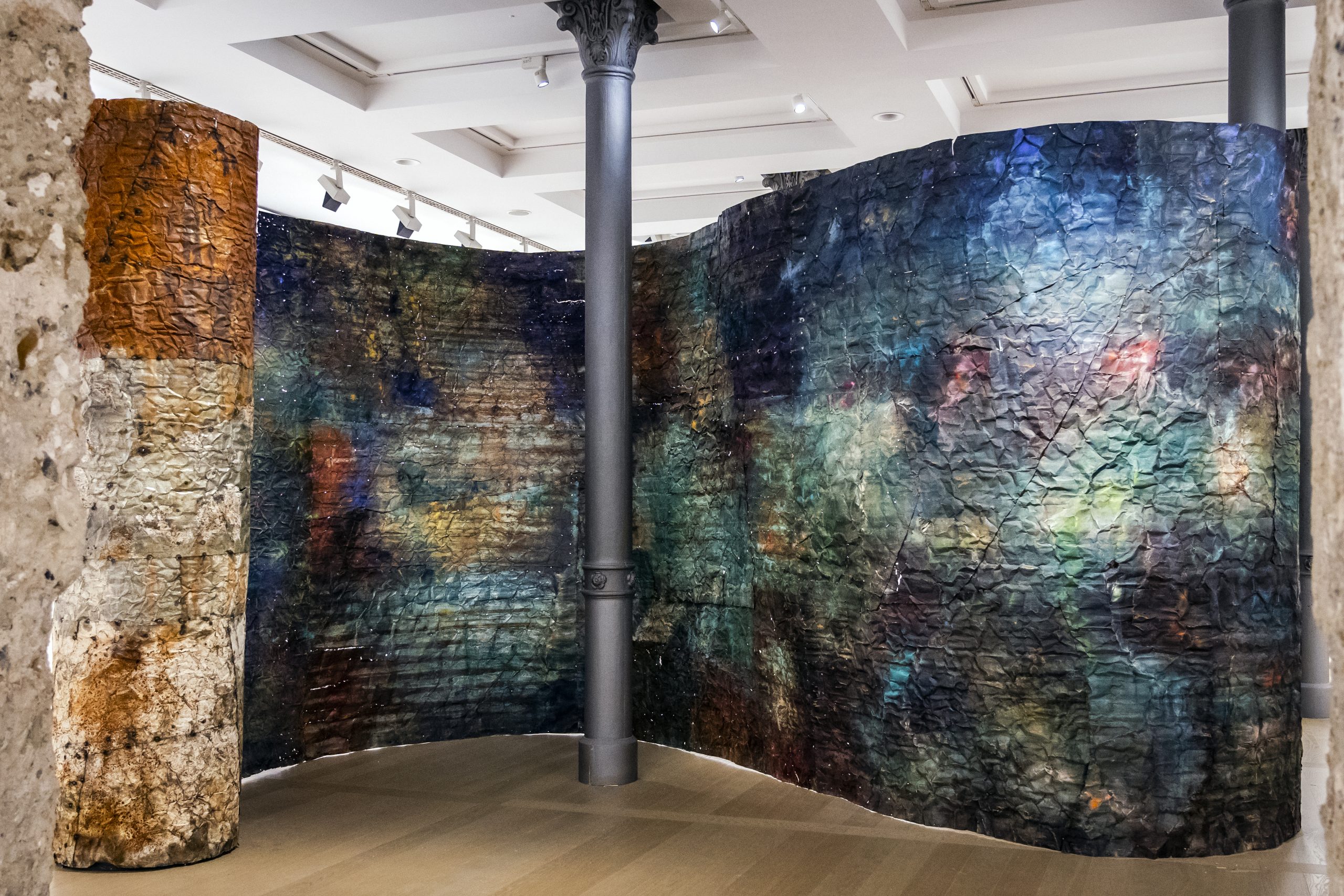 Ulterior degrees of freedom in the resisting city

In her intervention in the Sala delle Colonne at the Gallerie d’Italia, Francesca Leone’s use of every architectural detail seems to want to lay the foundations for an ulterior architecture, not simply evoked by her but actually built, “brick by brick” or, considering the standard material of her interventions, “sheet by sheet”. Yet, in the space and time that she has at her disposal, such architecture appears more possible than real: projectual, despite being material, ephemeral, despite being substantial, labile, despite being solid. In this sense, the artist develops an architecture that we can define as ulterior, meaning that it does not negate the reality that we inhabit, but does not resign itself to it either.

Indeed, Leone’s exploration entirely targets the value of architecture (a metaphor of History) as a plural experience. It is the result of a negotiation between opposing dynamics and interests from which the multiplicity of the many individual stories arise: the collective function of public space is integrated with the singular function of domestic space; the project’s architectural or political utopia is affected by the daily use made as the community passes by and interprets it; the autonomous body of the building corresponds to the porous mobility of flows; every vision of progress (or, rather, of an efficient satisfaction of needs) implies usury, being exposed to the risk of being misunderstood and to the fate of waste and rejection. For this reason, in the artist’s works, construction is never followed by destruction, but by the resistance of each element within another and, therefore, by the variable degrees of reciprocal freedom entailed by such coexistence.

For this reason, the Sala delle Colonne of the Gallerie d’Italia is not assumed or presumed by Leone but is transformed according to the variable degrees of freedom that correspond to the space and time dimensions that she has granted herself. Of the eight columns that mark and support the room, she accepts some – four in cast iron, two in exposed brick – while she covers the remaining two with neutral white plasterboard, as if they could become three-dimensional drawing pads. Winding its way through the eight columns, the artist then inserts a metal wall, the main work of the exhibition: in opposition to the rectilinear and rigid grid of the columns, it composes an unexpected metal volute that almost defines an architecture within an architecture. The matrix of this mobile and curvilinear work takes us back to the imaginative Baroque architectures of Bernini (The colonnade of St. Peter’s? The gestures of the human-river characters in the fountain of Piazza Navona?) or of Borromini (The oval staircase of Palazzo Barberini? The perspective corridor of the Spada Gallery?).  Thus, the work seems to invoke an open space and an aerial vision, although still impeded by the dimensions and conformation of the room itself. The artist transforms and regains this by veiling and softening the ceiling, creating the impression of a potential breakthrough towards an impalpable sky which, in reality, does not exist: yet another Baroque artifice capable of transfiguring an indoor environment into an outdoor one (Resembling the extravagant paintings on the vault of the Chiesa del Gesù which, too, is located in Rome, the city of artists?).

Firstly, though, it is the works’ shapes and materials that seem not to accept themselves as they are and, instead, seek an alternative, in memory or in the hope of other conditions and functions: another sheet of metal furrowed by electronic devices from disused computers becomes an analogy for an ancient ornament; yet another discarded metal sheet is rolled up around a mass of cement until it takes the form of a sculptural cippus or a broken column; a mesh of overlapping metal nets holds the remains of a false ceiling, resembling a carpet; three brushes, also made of metal sheeting, are covered by multicolored and shaded coloring which, beyond the rust, hints at windows overlooking a landscape or, at least, its illusory representation, as in a Pompeian domus or a sixteenth/seventeenth-century picture gallery.

When constructing these ulterior architectures, Leone chose to share the hall with two other artists whose works, both belonging to Intesa Sanpaolo collections, share similar visions and experiences in their attempt to reinvent the reality that surrounds us.

No title (1948) by Mimmo Rotella belongs to the phase that follows his encounters with the artists of Shape 1 (with their project on the coexistence of abstraction and figuration) and precedes the invention of décollage according to which, at the beginning of the 1950s, Rotella began to tear down advertising posters from the walls and rework them to discover new and unexpected iconographies. This work continues along the line of Cubist collages and Dadaism’s readymade objects, towards informal gestural expressiveness. Leone’s choice to exhibit alongside such works is therefore to be considered in relation to this composite line of work, and to its intersections with the several stories of so-called Italian Pop Art (from Angeli to Festa, from Schifano to Uncini), in which the artist has been specifically trained, developing explorations oriented at expressing the potentiality of objects and representing imagined scenarios.

In Two degrees of freedom: restoration and reinvention (1975) the architect, designer and artist, Ugo La Pietra, analyzes the separation between the “city that rises” – to use a Boccionian metaphor of a utopian impetus towards the future – and the residual city consequently deriving from below. Working in a “tissue-like” and “unbalancing” way (to use two of his expressions), La Pietra succeeds, however, in recovering and reinventing this residue, reintegrating the individual into his living environment. By juxtaposing the work with some of his preparatory drawings for the Giardino exhibition (MACRO, Rome, 2017), Leone seems to make this hypothesis of imaginative reconstruction her own.

If, in their works, the three artists articulate analogous concerns, they nevertheless adopt different points of view which are invited to interact by the exhibition, indeed developing temporality and expressive creations that resist within one another. Rotella’s point of view is frontal, his time is immediate, and his action is pictorial (he responds to the self-referentiality of wall paintings with a painting-object composed in real time while the surrounding city keeps changing its posters and, therefore, its messages). On the other hand, la Pietra’s point of view goes to the base/root of the analyzed phenomena and is therefore basic, radical (as, after all, was the precise definition of that Seventies’ architectural research of which he was one of the greatest representatives), diachronic and projectual, in the sense that he studies and connects first causes and then effects of an urban ecosystem in (un)conscious expansion. The vision applied by Leone, on the other hand, can be defined as circular (like a sculptor who walks around the material he is sculpting to verify it, or like an architect parameterizing his scale model) that leads her to create works of mnemonic consistency (each work is like a palimpsest in which the objectivity of the materials coexists with the new forms suggested by the subjectivity of the author) and plastically sculptural.

Here it is: all Francesca Leone’s works, even those in this exhibition, seek to make more spaces and times, more visions and experiences, coexist with each other. For this reason, they wish to coexist in our world, starting from the architecture we share with them. At the same time, though, they do not accept this world of ours: they sculpt the reality that surrounds us but, simultaneously, also all the possibilities it embodies. Worn and abandoned, these materials are reconnected with their lost beauty and authority, or with the meanings and functions they could have taken on if we had not reduced them to mere waste. When not epic, these works are lyrical citations of architectural and decorative archetypes of ideal cities that no longer exist, or do not yet exist. They are the actions of resistance to the digital, globalized, polluted, pandemic, fearful or indifferent, dispossessed and counter-revolutionary city in which we have been reduced to survive. Mannerist and self-generative in their unpredictable citations and evocations, the works you are about to observe are based on an irredeemable aesthetic and political awareness of having lived through cultured and glorious times, but also that of living in a time that is at risk of being the last: could it be almost at the end of History, if nothing else that of mankind, on this planet?

However, instead of arousing nostalgia or giving up, these works continue to precisely claim the persistence of those ulterior degrees of freedom which, despite not being easily granted to us, are still possible, and therefore traceable and practicable, if we keep on remembering, imagining, recovering, and reinventing the many stories of that city-world surrounding us which, despite everything, still resists. 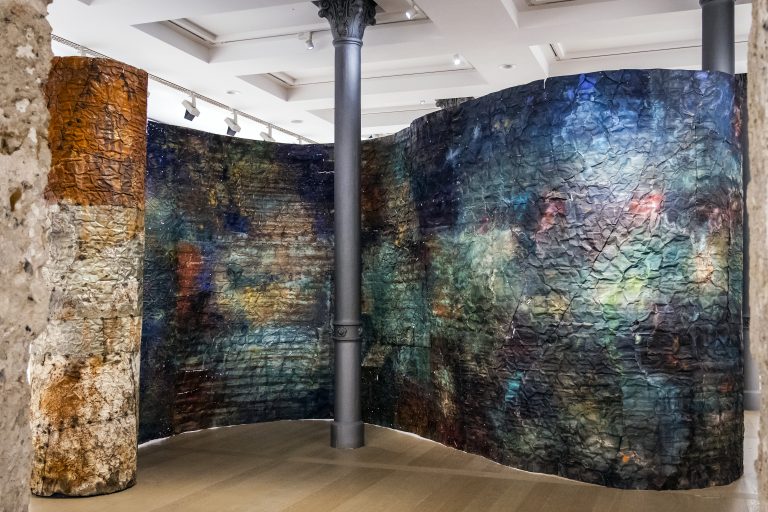 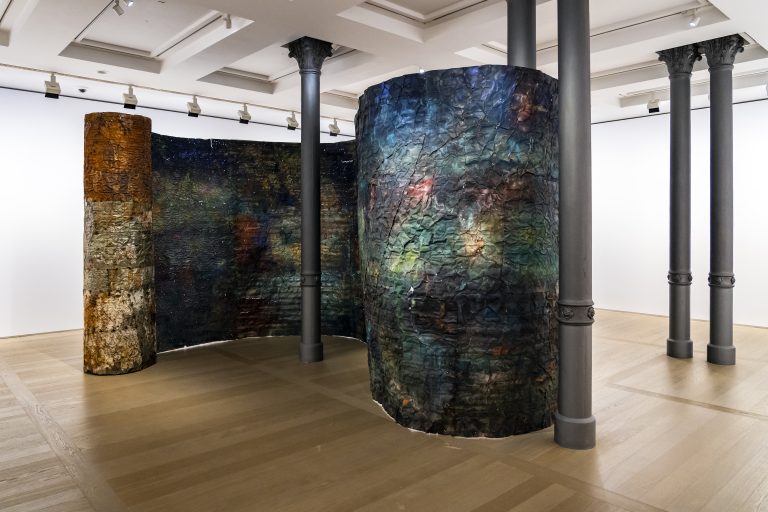 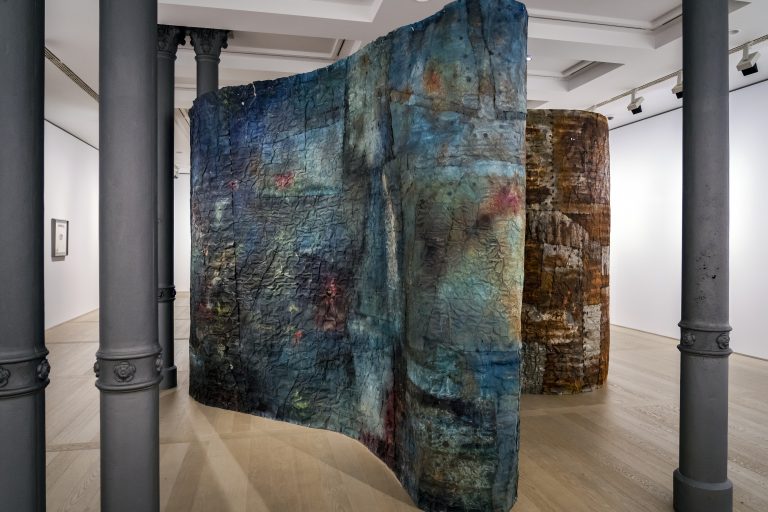 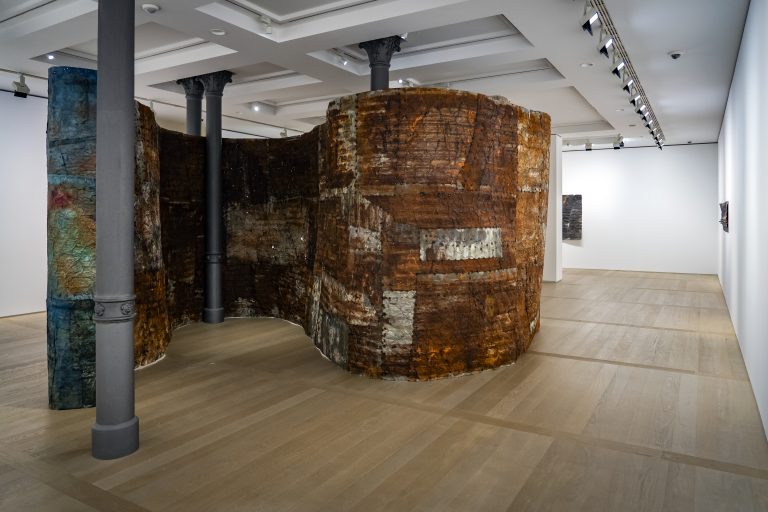 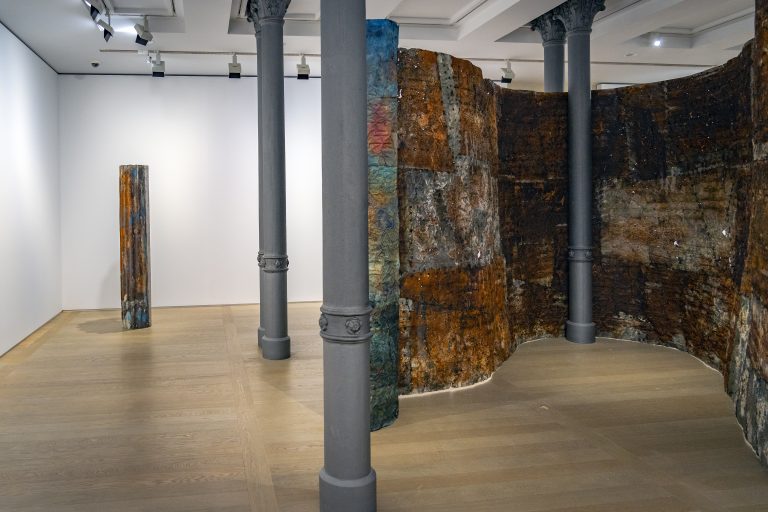 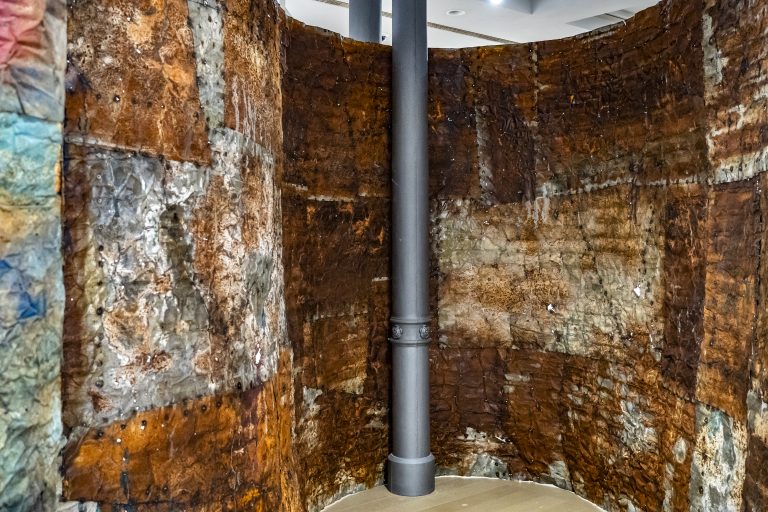 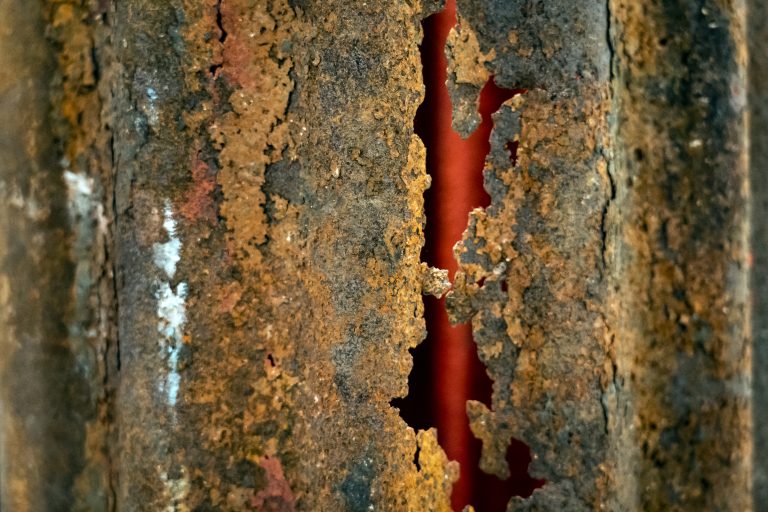 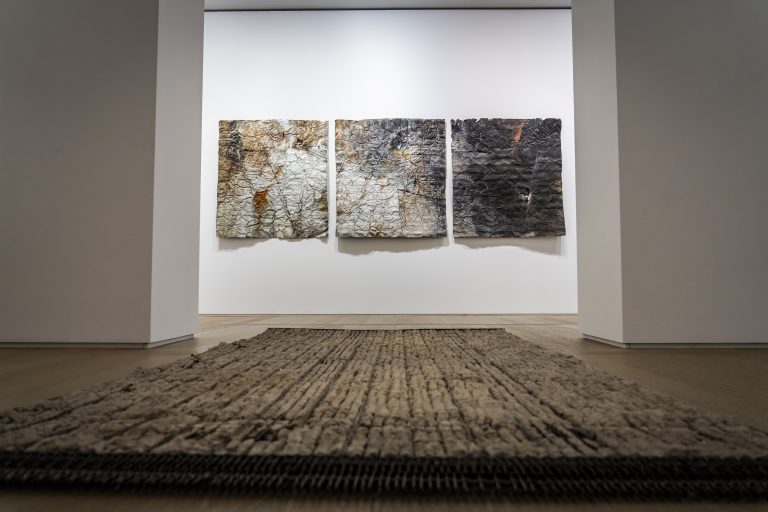